SEQUENCE:
A connected series of five of the same colored chip either up or down, across or diagonally on the playing surface.

This jumbo-sized version features a whopping game mat (32' x 27'!) for play on the floor or a tabletop. Play a card from your hand and place a chip on a corresponding space on the mat. When you have five in a row, you have a Sequence! Deftly block your opponents and remove their chips. This Jumbo SEQUENCE version includes a cushioned playing mat which provides easy viewing for party or team play! For 2-12 players, ages 7 and up. Each player or team tries to score the required number of five-card SEQUENCES before their opponents Contains 32' x 27' durable, cushioned playing mat.

NOTE: There are printed chips in the four corners of the game mat. All players must use them as though their color marker chip is in the corner. When using a corner, only four of your marker chips are needed to complete a Sequence. More than one player may use the same corner as part of a Sequence.

OBJECT OF THE GAME:

For 2 players or 2 teams: One player or team must score TWO SEQUENCES before their opponents.

For 3 players or 3 teams: One player or team must score ONE SEQUENCE before their opponents. 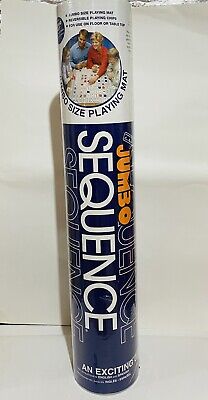 Place the game mat on a flat surface with enough room around the game mat for placement of the draw deck of cards, marker chips and discards for each player. 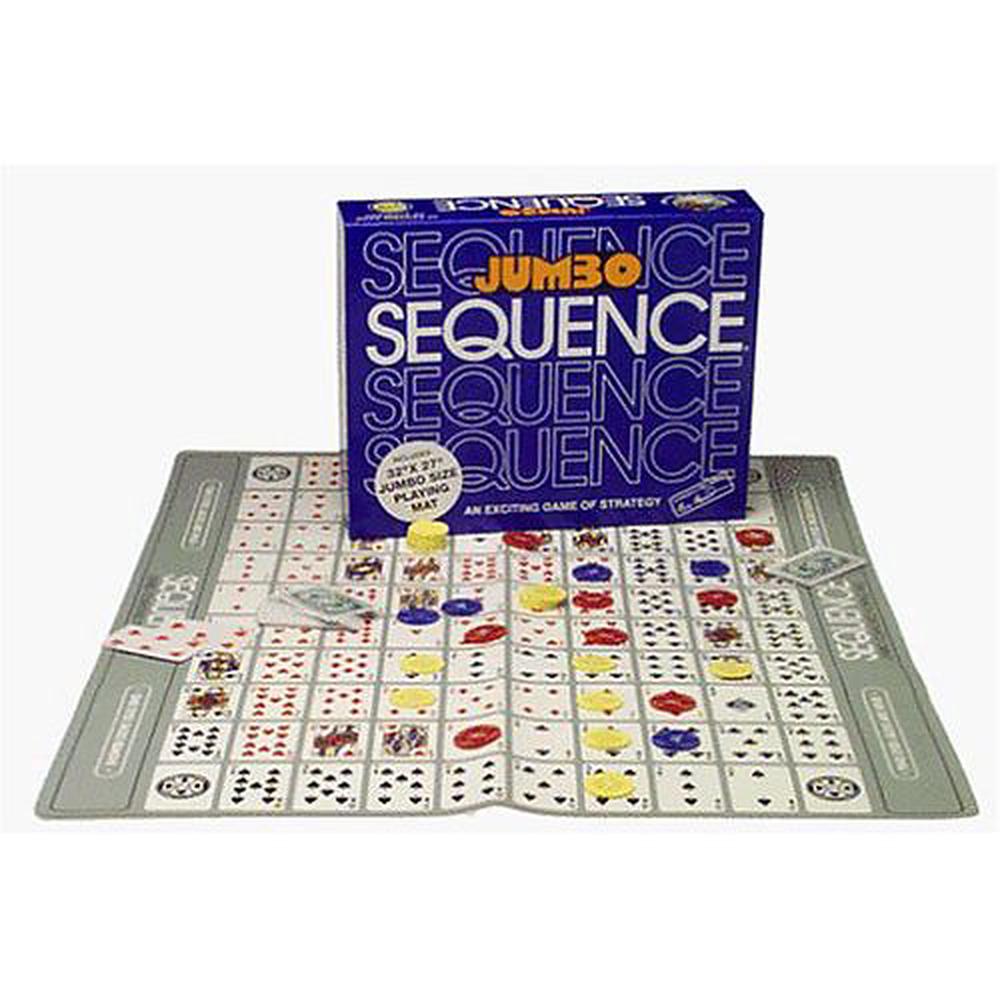 For 2 players or 2 teams: Team players must be evenly divided into two teams. Team members must alternate their physical positions with opponents around the playing surface.

For 3 players or 3 teams: Team players must divide evenly into three teams. Team members must alternate their physical positions every third player around the playing surface.

TABLE FOR NUMBER OF CARDS DEALT EACH PLAYER:

Beginning with the player to the left of the dealer and moving in a clockwise direction, each player selects a card of their choice from their hand and places it face up on a discard pile (each player should start their own discard pile in front of them visible to all players) and then places one of their marker chips on the matching card on the playing surface. Each card is pictured twice on the playing surface. Jacks do not appear on the playing surface. A player can play on either one of the card spaces as long as it is not already covered by another marker chip. Once a marker chip has been played, it cannot be removed by an opponent except when using a one-eyed Jack as explained below.The Jacks
There are 8 Jacks in the card deck. The 4 Jacks with TWO EYES are wild. To play a two-eyed

If you hold a card in your hand which does not have an open space on the playing surface because both spaces representing that card are covered by a marker chip, you are holding a DEAD CARD and you may turn it in for a new card. When it is your turn, place the dead card on your discard pile, announce that you are turning in a Dead Card and take a replacement card (one card per turn). You then proceed to play your normal turn.

Once you have taken your turn and placed your marker chip on the game mat, you must take a card from the draw deck. If you fail to take a card before the next player makes a move AND takes his/her card, you lose the right to take a card and you must finish the game with less cards than the other players – a disadvantage.

There must be no table talk or coaching team members. If a teammate says anything that alerts a fellow teammate to the fact that they are about to do something that they shouldn’t, every member of that team must forfeit one card of their choice from their hand placing it on their discard pile. When the draw deck becomes depleted during play, all discard piles are shuffled together to create a new draw deck. Play continues in a clockwise direction until one player or team scores the required number of SEQUENCES, at which point that player or team wins the game. If you are playing the game which requires two SEQUENCES to win, you may use any one of the spaces from your first SEQUENCE as part of your second.